A FATHER-of-three who nearly died after contracting coronavirus will scale Snowdon for the hospice which supported his family.

Last year, Leighton Webster was restricted to a hospital bed and fighting for his life with his family being supported by Primrose Hospice after being told to ‘expect the worst’.

After a long and hard road to recovery, Mr Webster will now fulfil a bedside promise he made to one of the nurses to climb a mountain together and get a picture at the summit.

And he will do it for the hospice which provided vital support to his eldest daughter Chloe, 11, and wife Emma with counselling from its Family Support team. 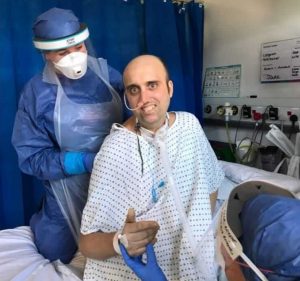 Leighton, from Redditch, said: “My eldest Chloe knew what was going on and is really close to me so for her I think it wouldn’t have been just losing a dad but a best friend too.

“While I was in hospital she had calls with Sophie from Primrose and was able to go to her own area and speak openly about things she wouldn’t want to put on her mum.

“Finding out they were providing such great support while I was in so ill hospital is why I wanted to give something back.

“I hadn’t needed to use Primrose before so I didn’t know much about the place but they were there for my family when they needed it and I want to say thank you.”

The inspiration for the walk came after a childhood friend happened to work at Alexandra Hospital and made a promise to Leighton.

Now the pair, along with Chloe, and other members of staff from hospital will take on the challenge of climbing Snowdon on Saturday, June 19

The 43-year-old said: “One of the nurses who looked after me I knew from when I was 13 and part of trying to pick me up he turned around to me and said we’d do a walk up a mountain one of these days and get a photo at the top.

“I said ‘I’ll hold you to that’ so when I left hospital they kept their promise and we put the plan into action.” 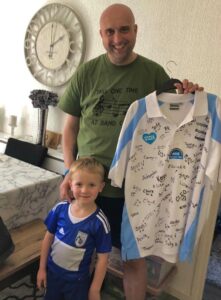 While he plans to be sensible on his climb and take regular rest breaks and pace himself, he will be motivated by thoughts of the hospice and that all important picture at the summit.

Leighton, who is also father to Skye and Noah, said: “I will think about getting to the top of Snowdon and taking that picture with the staff that helped me.

“That will be a picture I keep in a frame by my bedside.”

“He is a fit and healthy man who didn’t expect to become so ill but while he was in hospital, we were able to provide emotional support to his family.

“Leighton’s diagnosis was bleak so we were all so very happy when he miraculously managed to pull through and so pleased we could support the family at such a tough time.

“We wish Leighton all the best with his challenge and very much look forward to seeing that picture of him having conquered Snowdon.”