Come into Bromsgrove on the A448, Turn left at first traffic island and take the right hand filter lane – to turn right. Follow the road as it twists through the town – up New Road.  At the traffic lights carry straight on.  At the mini island (Ladybird pub opposite) take the first exit.  (See Local Directions Below) 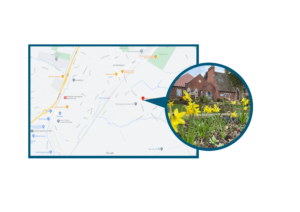