A MUM-of-two said she cried ‘happy tears’ after being asked to be an ambassador for Primrose Hospice.

Sharon Johnson, from Finstall, Bromsgrove, and her family have been supported by Primrose Hospice after her husband Chris was diagnosed with Motor Neurone Disease in 2018.

The charity, which provides care and support to people in north east Worcestershire, thought the 50-year-old would be the perfect ambassador thanks to her dedication to raising both awareness and money for the hospice. 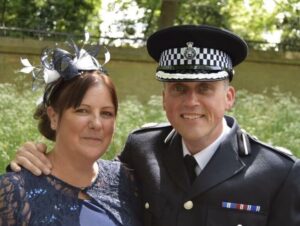 Sharon has also set up a fundraising group #WMPMND which has so far raised over £28,000 for Primrose and Motor Neurone Disease Association (MNDA) after they were due to run the Liverpool Rock n Roll Marathon in 2020 which has since been postponed.

She said: “When I received the letter asking me to be an ambassador for Primrose Hospice the tears just rolled down my cheeks.

“It is such an honour to be asked but I don’t do it to be recognised.

“Primrose Hospice has become a massive part of our lives so I do it because I love it and it is such an amazing facility to have on our doorstep.”

Sharon and the #WMPMND group original target was to raise £1000 but they have just smashed through their latest target to raise £27,520, based on Sharon’s West Midlands Police collar number.

They are now aiming to raise £32,280, Sharon and Chris’s police collar numbers combined, which will be split between the two charities.

Despite the postponement of the Rock n Roll Marathon, the group of 350 runners have taken part in other challenges including a virtual 50 mile challenge in January to mark Sharon’s 50th birthday.

The hospice’s ambassador role is vital in helping inform the community about the important work Primrose does providing care and support to people with life-limiting conditions, their families and bereaved adults and children.

“At every opportunity the couple have been incredible at raising the profile of their local hospice and breaking the stigma surrounding hospices by sharing their positive experiences at Primrose.

“We are incredibly grateful for all of their efforts and are really proud to welcome Sharon to Team Primrose.”

Primrose continues to provide care and support with online and telephone services as well as face-to-face appointments where necessary.

If you would like to be referred to Primrose’s Care services please speak to your GP or if you would be interested in Family Support following a bereavement call 01527 889799.

Lockdown 3: How this affects Primrose Hospice