The family of a “brave, beautiful, determined and inspirational” mum-of-two has donated almost £8,000 she raised in honour of the hospice which “saved her”.

Sara Meddings, from Bromsgrove, credited Primrose Hospice with coming to the rescue after she was given the news her condition was life-limiting and set about organising a spectacular ball to raise money as a thank you.

Sara’s Ball took place at Burlington Hotel in September last year and was an incredible success, raising thousands for the charity as well as awareness of the services on offer at Primrose.

Mum Trish said Sara was determined to support Primrose because of the care she received after her secondary diagnosis in late 2016.

“She said once she got the help from Primrose Hospice it saved her and she meant it.

“It saved her mentally because she was obviously going through a very terrible time in her life.

“It helped with the little things as well as the big things.

“But primarily she had absolutely fantastic support from her pain management doctor who would go to see her at home if she needed it.”

Sara worked at Mondelez International (Cadburys) for 21 years and was initially diagnosed with breast cancer after discovering a lump in March 2015.

She had six rounds of chemotherapy, a lumpectomy, a number of lymph nodes removed and radiotherapy before being given the all clear in early 2016.

When she was diagnosed with secondary cancer at the end of 2016, Sara displayed her typically determined attitude after being told she had just 12 months left.

Turning to the doctor, she said: “I think we can do better than that.”

And she did, organising numerous fundraisers and raising in excess of £20,000 for various charities including Primrose Hospice as well as creating special memories with her children, family and friends.

“Sara lived life to the full even before she was diagnosed but even more so afterwards,” her mum explained. 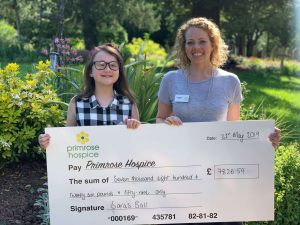 “The children are what encouraged her to keep going – she got them to school, she got their tea ready and she did fantastically fun things with them, even before she knew she didn’t have much time left.

“She had the ability to draw together different groups of friends from all different walks of life then they would become friends too.

“Sara also wanted to raise awareness about breast and secondary cancers and to give people hope, I guess, and to understand the value of life.”

Incredibly, despite being poorly, she managed to make it to her ball in a beautiful silver gown and brought guests to tears as well as laughter with her moving speech.

The amazing amount of money Sara raised will help Primrose Hospice to provide care and support to people with life-limiting conditions living in north east Worcestershire, and their families.

Services are free for patients but the hospice must raise £1.75 million annually to cover these costs with more than 85 per cent having to be fundraised by the community, trusts and grants.

David Burrell, Primrose Hospice CEO, said: “Since joining the Hospice in 2018, I have met some amazing, determined and generous people who despite their own challenges want to help other people benefit from the care and compassion that Primrose Hospice provides.

“It was a privilege for me to be at Sara’s Ball to see how her vision of helping Primrose to continue to support other people was realised.

“I am privileged to have known Sara, even if for such a short time and I am immensely grateful for what she achieved for Primrose Hospice.”

Get your 2023 off to green start with Primrose Hospice!

Get Festive and Fit with Primrose Hospice this Christmas!