Police officers lace up their trainers and raise over £30,000 for Primrose Hospice

On Sunday 24th October over 300 Police officers, their colleagues, families and friends all pulled on their running gear and ran the Rock and Roll Liverpool Marathon and Half Marathon as part of team #WMPMND.

Police officers from across the whole of the United Kingdom have been inspired by Chris Johnson and his wife Sharon to raise vital funds by running, cycling and even singing! They have raised over £60,000 so far which will be split between Primrose Hospice and Family Support Centre and the Motor Neurone Disease Association.

David Burrell, Chief Executive Officer at Primrose Hospice said: “It has been an absolute privilege to watch the WMPMND campaign. Despite several setbacks including the cancellation of the race in 2020, the entire team have shown determination to run this race and raise money for Primrose Hospice and Family Support Centre. Thanks to their efforts we have been able to expand our services during covid to help support the community.”

Primrose Hospice has been supporting Sharon and her family through their family support centre. 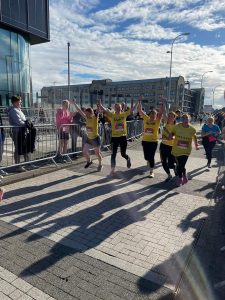 Sharon Johnson said: “Primrose Hospice is a really special place to myself and my whole family. So, I was privileged to be part of team #WMPMND who have raised not only vital funds but awareness for both charities. Running the Rock and Roll Liverpool Half Marathon was certainly a challenge, I’m not a runner but I am now! It was worth every second to see the sea of yellow t-shirts.”

Primrose Hospice would like to thank Chris, Sharon and the whole #WMPMND team who have all done something amazing which will help them to continue to provide support to people living with life limiting illnesses and families in North East  Worcestershire.

There is still time to donate and you can do here: https://uk.virginmoneygiving.com/Team/WMPMND

25 years of Lights of Love bringing our community together

Three steps over the threshold